You are here: Home | Our Firm | Brandi L. Chudoba 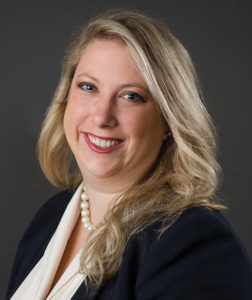 Brandi Chudoba began her career practicing in the General Litigation group in the Chicago Office of Kirkland & Ellis, LLP. At Kirkland, she represented major international corporations including the Dow Chemical Corporation, General Motors Corporation, PriceWaterhouse Coopers, Morgan Stanley, and GMAC. She handled a wide range of litigation matters, ranging from complex and multi-district civil litigation under ERISA and the securities laws, to cases involving products liability and commercial and insurance contracts.

After she and her husband returned home to the Rockford area to be closer to family, Brandi joined the Faulkner Law Firm and within three years, became a partner in the firm. Brandi utilized her litigation background and training on behalf of Rockford area hospitals, physicians, and physician groups. She held primary responsibility for the strategy and management of the defense of multiple healthcare professional liability matters and she was on trial teams that notched four jury trial victories for the firm’s healthcare clients. In 2012, Brandi branched off on her own to join her sister, Mindy Chudoba, in their own practice as Chudoba Law Firm, LLC; in 2017, Brandi then returned to help establish Faulkner Spears & Chudoba LLC.

A persuasive oral advocate who has been formally trained in communication, Brandi also brings strong writing skills to her clients as well. She has taken the lead in various appellate briefs, obtaining favorable decisions from the Illinois Appellate Courts for both the First and Second Districts. Her appellate skills have preserved hard-won trial victories for her clients.

Brandi is philosophically committed to devoting time to pro bono matters. Early in her career she took a particular interest in representing persons seeking political asylum in the United States and lead a trial team to victory in the Immigration Court on behalf of a political activist from an Anglophone province in Cameroon.

Brandi is admitted to practice in Illinois and Wisconsin, and before the United States District Courts for the Northern and Southern Districts of Illinois.

Deprecated: implode(): Passing glue string after array is deprecated. Swap the parameters in /home/customer/www/fsclegal.com/public_html/wp-content/themes/fsc/rt-framework/widgets/latest_posts.php on line 22